The lesson of the highly irregular and controversial 2020 election was that the devil is in the election process details. True the Vote (TTV) has learned this lesson well and is working to apply what it has learned to the upcoming midterm elections. TTV founder Catherine Engelbrecht describes the situation as a “fool me once, shame on you; fool me twice, shame on me” scenario.

Preparation will be the key to preventing widespread irregularities and shenanigans from deciding the 2022 midterm elections. On Monday, Engelbrecht gave a webinar called “5 Things You Can Do Now for an Honest Election in November.” In the presentation, Engelbrecht spelled out five actions citizens can take now to help make sure their local election officials are conducting competent and fair elections. The full presentation is available here (for Locals subscribers only). However, PJ Media viewed the webinar and summarizes the key points below. 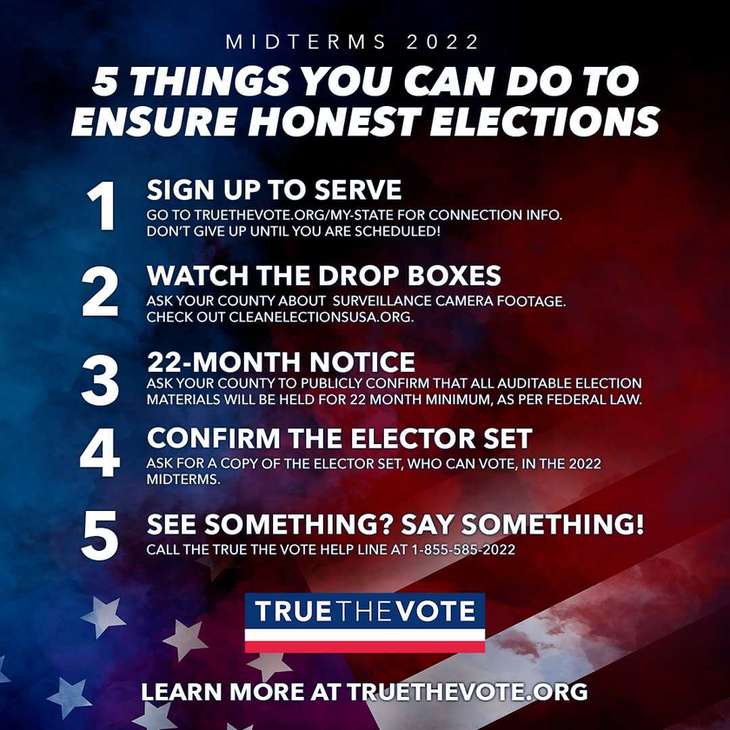 Election rules, unless enforced, are not necessarily going to be observed, said Englebrecht. She said that 2020 was a lawless election that should never have been certified because there were countless breaches of compliance and standards.

Englebrecht explained that election integrity standards have eroded year after year, and we’ve now reached a point where there’s no longer consistent truth from place to place. Nonetheless, rules and state laws matter, and they must be enforced.

Englebrecht cited the 1994 case Roe v. Alabama (no, not that Roe), which was decided by the 11th Circuit and affirmed by the Supreme Court. The case involved the now all-too-familiar scenario where the Republican incumbent was well ahead on Election night but by the following morning, enough absentee ballots had appeared to put the Democrat over the top. Many of the new ballots were not compliant with state law because they weren’t in an envelope signed by the voter and either a notary public or two witnesses. The courts ultimately decided that the contested ballots would “dilute the ballot box” and disqualified them.

And so, concluded Englebrecht, when it comes to substandard vote casting, the law is on our side, and the courts have affirmed it. The rules are the rules; either election officials comply fully or the election cannot be certified. But it’s crucial to be prepared in case we need to step in and stop the certification of tainted results.

Englebrecht then elaborated on the five things ordinary people can do to help put candidates and political parties in a position to prevail in court when they contest funky elections.

Englebrecht says it’s crucial for more Republican voters to get their eyes and hands on the process. There currently isn’t parity of party among election workers, and that needs to be addressed.

One way to get involved is to be a poll watcher. This is a great way to observe the process and get your feet wet if you haven’t worked an election before. To sign up, reach out to the party or candidate of your choice. States allow candidates to appoint a number of poll watchers in every precinct.

Another option is to be a poll worker. Interested? Go to TrueTheVote.org and click on My State. As a poll worker, you will work for the county and will usually be paid a stipend. Different positions are available. If there are unfilled positions, the county will plug in random people from its list. If there aren’t enough volunteers, polling stations will be closed and voters sent to another one.

The ostensible goal of staffing the polls is to have parity of party; the ideal is to have an equal number of Democrat and Republican poll workers. But the truth is that Republicans are usually under-represented.

Englebrecht warned that it’s seldom simple to sign up for poll work, and you should go into it prepared to follow up a lot. Become a squeaky wheel and keep pushing until you get a spot. In some cases, your political party can help get you on a list. Once you’re in, the county will train you.

Don’t be worried that you’re not capable or good enough. The country needs people to work elections. If not you, then who?

If your state has dropboxes, make sure you understand how they will be monitored. First, check online for information, then follow up with election administrators. Open a records request.

When TTV tried to contest certifications in 2020 because of dropbox abuse, the organization found that the surveillance video was either non-existent or useless. So you can be helpful by checking that your county surveillance cameras are close enough to the dropboxes, properly aimed, and focused.

Englebrecht mentioned a county sheriff who contacted election administrators and had them stream the surveillance cameras to his office so sheriffs could help officials monitor dropboxes. She called the idea “brilliant” and recommended it to local law enforcement.

Dropbox tailgate parties are another option. For example, CleanElectionsUSA.org already has 37,000 people signed up to watch dropboxes. Clearly, if you volunteer to watch a dropbox, you must be respectful and never infringe on anyone’s right to vote. Don’t make it weird for voters or get in anyone’s face. But most of all, meet like-minded people and have fun!

Pre-notify your election administrators that any auditable item is required by federal law to be held for at least 22 months following an election. This includes all voter documentation, surveillance video, chain-of-custody documentation, etc.

Englebrecht stressed that her organization needs good, clean records, which they did not have in 2020. “Substantial compliance [with election laws] is not compliance,” she explained. “If you don’t follow the law, you cannot certify the election.” When you put officials on notice that they are expected to maintain proper documentation, it keeps them from being able to say they didn’t know they had to afterward.

Federal laws dictate that each state must have a fixed set of electors (also called the voter roll) who are eligible to participate ahead of the election. This record should be confirmed, accurate, and viewable prior to voting. Pre-notify your state officials that this is required, and ask for a copy.

After the election, you can then say, “This was the auditable set that went into the election. Did these electors cast a vote? And where did the extra votes come from?”

When TTV compared the 2020 votes cast records from the voter rolls to the tallies the counties provided to the states, there were gaps. “There shouldn’t be. They should be a perfect match,” explains Engelbrecht. She said most state records reconciled to within a fraction of a percent to 1%, but some states were way out of balance.

States that can’t reconcile their numbers make excuses, warned Englebrecht. But she said the correct response is, “No. If the numbers don’t match, you don’t certify.”

How can we prevent the certification of substandard results from happening again in 2022? “Eyes on the process,” Englebrecht asserted. “As the votes are being counted, these numbers should be able to be reconciled” — and we should be watching this closely.

Englebrecht noted that states with same-day registration will have an additional voter set, but that should also be reconcilable. “If it doesn’t reconcile, if counties don’t have their votes in, if states can’t tell you who voted, you can’t certify it,” she emphasized.

In 2020, there was unequal protection because there were different standards from county to county, but TTV lawsuits were derailed by a lack of data. No judge would make a major move in such a politicized environment without a cast-iron case.

5: See something? Say something!

Prepare ahead of time by finding out who in your network you can reach out to if you see something fishy. Know what to do. Have numbers handy. States have an 800 number for reporting, and secretaries of state usually do, too. But they’re not likely to be responsive quickly. Have local contacts on speed dial.

Engelbrecht said watchers can also call True the Vote’s Election Integrity Hotline (855) 585-2022. Or better yet, fill out an incident report at their website. They will forward all actionable reports to local law enforcement immediately. The 2022 TTV tipline goes live in late September.

Engelbrecht said voting in person on Election Day is the gold standard for secure elections — along with highly secure paper ballots, fully-staffed election sites and offices, etc. But life isn’t perfect, and early or absentee voting is an acceptable alternative. For example, if you’re working at the polls, you must vote before Election Day. The same is true if you’ll be out of town.

America has the lowest voter turnout of any industrialized nation, according to Engelbrecht. We need to bolster the numbers, so don’t be a purist. The continuum looks like this:

When asked if there is an advantage to early voting, Englebrecht said yes: you get your vote in. Sometimes things go sideways on Election Day and you may wind up not getting to the polls as planned.

Elections are won and lost on process, summarized Englebrecht. It’s important to make sure all artifacts are held for 22 months and to make sure there’s an elector set record going into the election.

We have to position ourselves to be quick out of the gate, Englebrecht advised. If the standards are not followed, we need to point out that the 2022 election results cannot be certified. “It’s really that simple,” she says.