The storming of the Capitol Wednesday is despicable, and everyone involved must be prosecuted.

The fact is, it didn’t happen out of nothing. We had a deeply questionable election. President Trump’s remarks that day were unwise and unhelpful, making promises and raising expectations he could never fulfill.

So have been those of his strident opponents.

Far-left Democrat Rep. Alexandria Ocasio-Cortez used the moment of national strife this week to make things worse, calling on Texas Sen. Ted Cruz and Missouri Sen. Josh Hawley to resign or be expelled from the Senate for their effort to protest and investigate the 2020 election.

AOC’s call is risible and opportunistic.

In November 2018, AOC directly and openly supported an illegal occupation of House Speaker Nancy Pelosi’s office to force action on the Green New Deal, her pet and extreme issue, according to Politico.

Capitol Police said they arrested 51 protesters for unlawfully demonstrating outside Pelosi’s office in the Cannon House Office Building. The arrests began a few hours after the demonstration began, when protesters refused to leave the area. Pelosi said she welcomed the protest and called on the police “to allow them to continue to organize and participate in our democracy.”

Nevertheless, it was disruptive to the constitutional lawmaking process–and illegal–and Capitol Police made numerous arrests to clear the Speaker’s office. AOC herself, though, left before the arrests began.

In a full-day of demonstrations on Capitol Hill, hundreds of mostly women protesters raised fists and shouted “Lock Him Up” in front of the Supreme Court, unfurled banners inside a Senate office building and even blocked a Senate elevator door to directly confront Sen. Jeff Flake on live TV.

This illegal occupation of the Senate’s place of work was encouraged by Kamala Harris, soon to be the vice president of the United States.

“We will not be bullied,” Sen. Kamala Harris, D-Calif., told the demonstrators in front of the Supreme Court building where Kavanaugh hopes to sit soon.

No one was “bullying,” other than perhaps those who sought to disrupt the peaceful constitutional process of confirming a SCOTUS nomination.

AOC not only did not oppose that–she called for Kavanaugh to be “canceled” while smearing him.

AOC’s attack on Cruz and Hawley is risible not just because of this history, but because of what she’s attempting to do now. AOC, as a leader of the far left, could have denounced the protests and riots and the movements behind them that plagued numerous American cities across the second half of 2020. Those riots destroyed minority Americans’ homes and businesses and ended the lives of too many. Those riots are still going on in Portland, Oregon. Ocasio-Cortez still has the opportunity to denounce them.

Antifa and BLM might have listened to AOC if she had ever called on them to keep the protests peaceful. Of course, they also might not have. She chose instead to excuse the violence, long after it had proven to be destabilizing to the country, destructive to property and business, and deadly to a couple dozen Americans.

When AOC could have led, she failed. She excused.

Now she’s sent out her communications director to weasel out of her clear and public record.

“@AOC’s Comms Director here,” Lauren Hitt wrote on Twitter. “Right-wing accounts are taking the last tweet from this old thread on the ‘defund’ mvmnt & twisting it to imply AOC supports violence like what’s happening at the Capitol. We asked @Twitter to stop the misinfo, but as we wait, you can help with a RT.” 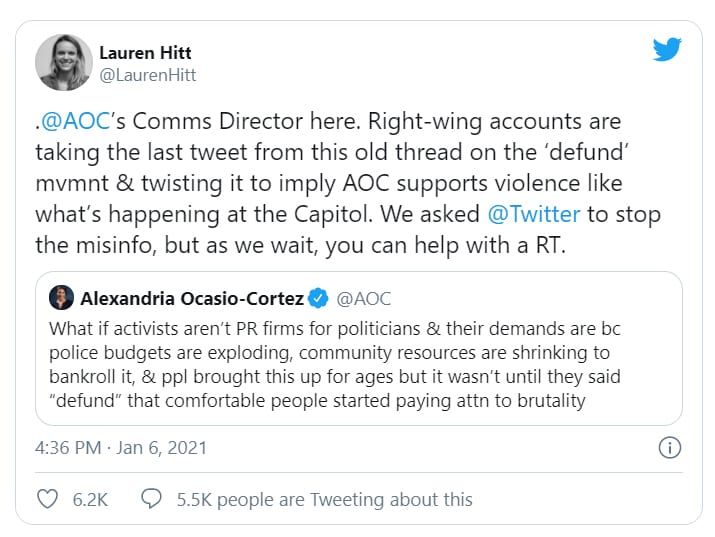 The defund movement predictably presaged a sharp rise in violent crime across the country. Are the victims of these crimes entitled to blame AOC for leaving them unprotected from criminals?

As my colleague Matt Margolis noted, this isn’t the worst of AOC’s riot comments.

No need to add any emphasis to this:

The incursion into the Capitol has shocked the entire nation. It didn’t have to happen. It shouldn’t have happened. It’s also being used to create further division at the worst imaginable time for our country.

Calling for Cruz and Hawley to resign or be expelled is rank opportunism. It’s certainly not principled, given AOC’s history. Their departure would trigger a process in which Democrats would hope to replay the special election they just won in Georgia, adding to their Senate majority. It’s about power, not principle.

In the Texas case, it wouldn’t work. Gov. Abbott holds the appointment power and would likely appoint Rep. Dan Crenshaw. Crenshaw would hold that seat.

Whenever Rep. Alexandria Ocasio-Cortez has a choice, she chooses to inflame. AOC is part of the problem, not the solution, to extremism fueling violence in American politics.