A California state senator is sharing how to hide monkeypox symptoms before going out for a night of fun at San Francisco’s Up Your Alley street fair.

Senator Scott Wiener (really), a Democrat representing the 11th Senate District in the Bay Area, shared a “safety” guide that advised people to “cover it up with a bandaid or clothing before you go out” if they found any pox-looking bumps on their skin.

“There’s never been a better time,” a cartoon character named Douchie says, “to dress from top to bottom in latex or leather.”

I suppose not. But there also hasn’t been a better time to stay home for a weekend or three and catch up on reading.

There was other advice that I’m so not going to tell you about. 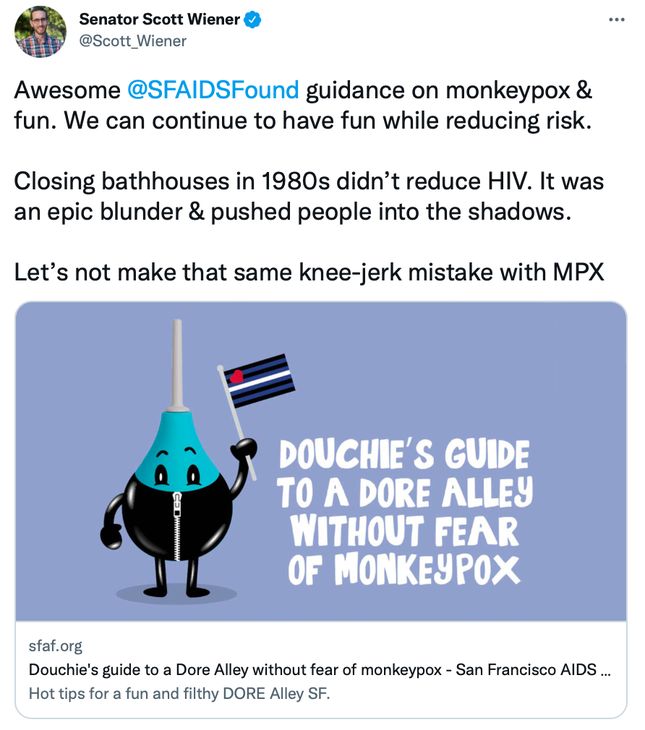 Closing the bathhouses may have helped, but as someone who lived in San Francisco after they were closed, trust me when I tell you that nobody there was “pushed into the shadows” unless that happened to be their kink.

This isn’t just about one state senator from California’s kinkiest district, however.

“Silence is violence,” we’re told. Except when it isn’t. The Left’s silence on monkeypox — after more than two years of ceaseless and often counterproductive talk and action on COVID — is telling.

Democrats criticized President Ronald Reagan for never using the word “AIDS” in public (even though he did), but today they won’t publicly speak simple truths about who is catching monkeypox and how.

A simple statement from Presidentish Joe Biden might do wonders for those whose behaviors put them most — like 98% — at risk:

Fellas, listen, listen, listen. I know you like to have your fun. They don’t want me saying this, but Corn Puff and me used to get up to stuff that would make Freddie Mercury blush. But that was back before, when we didn’t have the diseases and the monkey, the monkey… stuff [inaudible].

So I know, fellas, I know. You gotta listen to me, you gotta. Just keep it zipped for two weeks to stop the spread. Just two weeks.

This is not the actual message Biden would deliver, I think. But I couldn’t help myself.

Would people listen? Not everyone, that’s for sure. Twenty-something men can be pretty stupid about sex (I know I was), even when there are women involved to tell them no.

But maybe enough would take the message to heart, particularly if it were repeated by all the official and unofficial state organs — just like they endlessly repeated for two years regarding masks, social distancing, and lockdowns.

All of this is necessary because our public health officials pre-failed us on the smallpox vaccine, which works against monkeypox:

Bureaucrats allowed the vaccine to expire without being replaced because they wanted to develop a freeze-dried version with a longer shelf life. But FDA delays in approval meant that the new vaccine didn’t appear even as the old vaccine expired. The end result was that when a vaccine was needed, nothing was available.

This Twitter rando had better advice than any Biden administration official I can think of:

So why is monkeypox safety getting the silent treatment?

Maybe it’s all about the money and power that come from declaring monkeypox an official Public Health Emergency, as PJ Media’s own Athena Thorne explained on Thursday:

Authoritarian politicians and bureaucrats are having a tough time giving up the dictatorial powers afforded them by the Great COVID Powergrab, so the latest declaration is doubtless music to their ears.

You can’t have a public health emergency without sick people. And if that means staying mum about who is catching monkeypox and how, then that’s exactly what the Left will do.

So just like when George Orwell declared that British pacifists were “objectively pro-Fascist,” I think it’s fair to say that the Democrats and our public health establishment (but I repeat myself) are objectively pro-monkeypox.