President Trump accepted America’s nomination to be its next president on Thursday night, of Friday he was back on the campaign trail in Manchester, NH. That’s familiar ground to Trump from the 2016 campaign. It’s where Joe Scarborough and Mika Brzezinski spent the evening of the New Hampshire primary hanging out in Donald Trump’s hotel suite just like all thoroughly unbiased journalists do.

Even before he spoke, there were little lacey panties to be doused with sand and pulled high into the buttcrack: 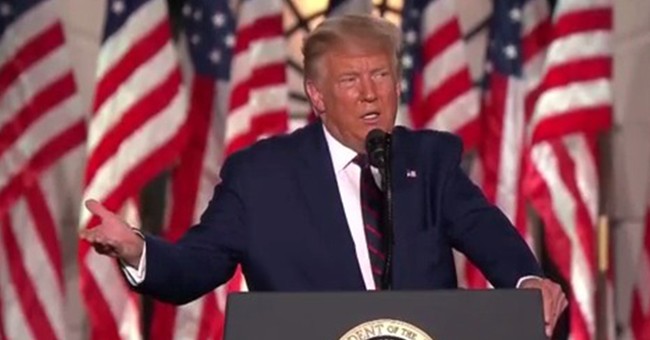 While President Trump touched on a lot of subjects, one that was very important to him was the spread of violent leftwing terrorism in some American cities. These cities have two things in common. They are in states governed by Democrats and they are in cities governed by Democrats. And not just any Democrats, the Democrat apparatus governing those cites and states is composed of people who actually loathe America and see this violence as a way of changing how the nation is governed. In the forefront of his thoughts was the aftermath of his acceptance speech where many attendees were physically accosted by Democrat street thugs and were only saved from bodily harm by the intervention of law enforcement (READ Watch: BLM Supporters Carry Out Homophobic Attack On Guests Leaving the White House; VIDEO: Sen. Rand Paul and Wife Attacked by BLM Mob After Leaving White House and When Will Sen. Kamala Harris Condemn The Attack On Her Colleague Rand Paul?).

This is how he described them

Not only are the Antifa thugs who now lead and manage the BLM movement not peaceful, they effectively control the Democrat party to the extent that Joe Biden can’t bring himself to condemn arson, looting, and assault because he needs those people and their supporters to turn out for him in November.

To the GOP’s credit, they recognized this weakness before the GOP convention. They hammered home law-and-order night after night. Within hours of Rand Paul and others being assaulted on DC’s streets, the Trump campaign was on the attack. (READ and be sure to watch the video: Welcome to ‘The Purge’: New GOP Ad Blows The Dems Out of the Water over BLM Violence.)

But to make this strategy works will require 100% buy-in from the man at the top of the ticket. He can hammer home the theme in a way that no ad ever can. And I think President Trump is completely capable of doing just that.