The game offers three main features, according to its website:

FAKE NEWS TURKEYS: Shoot the Fake News turkeys that attack Kyle to get the highest score, compete with friends and unlock new levels!

BECOME KYLE: Play as Kyle Rittenhouse to destroy fake news turkeys in a simple point n’ shoot game for all ages to enjoy!

HELP RAISE FUNDS: Kyle Rittenhouse is raising funds to sue the leftwing media organizations for defamation and now you can help. 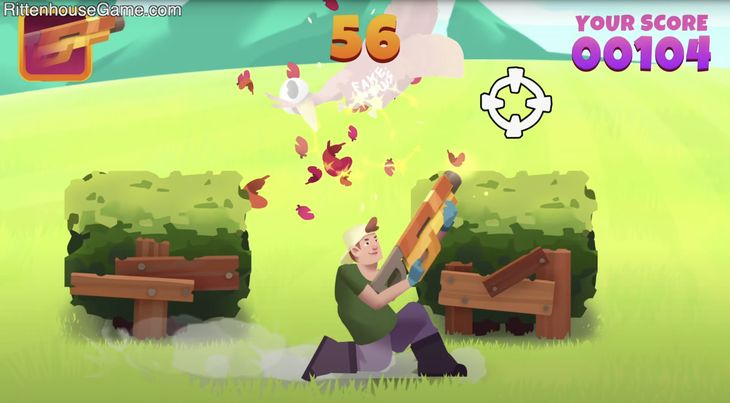 “Hi, I’m Kyle Rittenhouse. You might know me as the guy who was recently acquitted from all charges in the Kenosha self-defense case,” says Rittenhouse in a promotional video (embedded below). “From the very beginning, I did nothing wrong. But that didn’t stop the media from smearing my name. It’s time to fight back against the fake news machine. This is why I’m launching The Kyle Rittenhouse Fake News Turkey Shoot video game.”

The video shows images of slanderous media coverage, then cuts to a scene from the game in which a Rittenhouse avatar blasts fake news turkeys. Kyle returns, saying, “The media is nothing but a bunch of turkeys with nothing better to do than push their lying agenda and destroy innocent people’s lives. So go to RittenhouseGame.com and preorder the game now and help me fund the lawsuits to stop these fake news turkeys!” Rittenhouse poses with a Nerf gun before the video cuts back to a scene from the game, in which his avatar wields a similar arm.

Proceeds from game sales will fund The Media Accountability Project (TMAP). “TMAP will serve as the official fundraising vehicle for holding the worst offenders in our activist media accountable in court for their malicious and defamatory lies and propaganda,” explains Rittenhouse in a fundraising email.

According to its website, “The Media Accountability Project ‘TMAP’ is the official fundraising vehicle for helping Kyle Rittenhouse hold the worst offenders in our activist media accountable in court. … In the long term, we will provide material support and promote the important work being done by independent journalists who are committed to the truth.”

Fake News Turkey Shoot was developed in cooperation with Mint Studios. The Washington Examiner quotes Mint Chip, the CEO of Mint Studios: “We had to step in to help Kyle after we saw what was done to him. Before the trial, you couldn’t even mention his name in a positive manner on social media without getting banned. The truth literally got you suspended. We fight for the truth.”

Mint Studios appears to be a one-man operation that was founded almost three years ago. On the Turkey Shoot preorder page, the indie studio describes itself as “the leading game development studio, ready to develop any large scale games for influential people and serious worldly issues. Battling against the fear or worry of removal. We put privacy first, and refuse to deplatform any legal content.” More power to them.

The game can be preordered for $9.99 at its website.