Is it just me, or is the messaging on the COVID vaccines more than a little off? Here’s NBC medical analyst Vin Gupta MD either contradicting himself, moving the goalposts again, or just saying the vaccine can’t be trusted yet but he’s getting it anyway to virtue signal to us unwashed commoners.

As one of the first vaccinated people in New Haven is planning on traveling after the second dose, @VinGuptaMD reacts:

“Just because you get vaccinated after the second dose does not mean you should be traveling. … You could still get infected and pass it along to others.” pic.twitter.com/HXTSTt95bS

You can take the vaccine but still get infected? I don’t get it. Whatever it is, it’s bad messaging that will confuse the folks.

While the vaccine was but a dream, an aspiration, media downplayed even the possibility that we would see it before the end of hell year 2020. NBC led the demoralization campaign. Because that’s why NBC exists. Well, that and pushing Russia conspiracy theories. 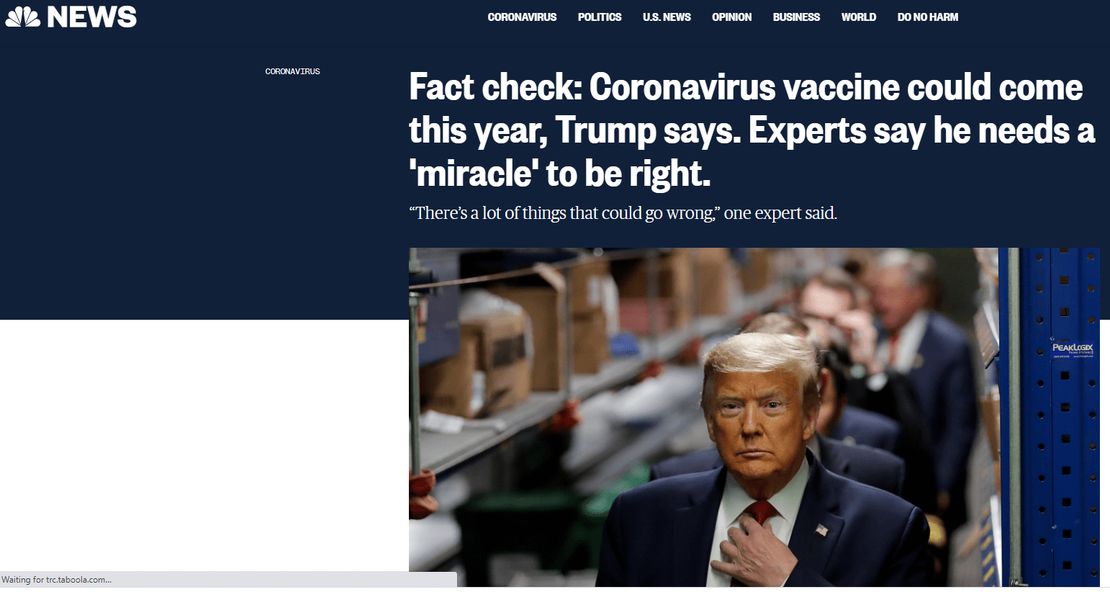 Behold, the “miracle” has arrived, even out to the frontier of Texas. In any other time, Operation Warp Speed and its leader would be hailed as heroic.

Healthcare workers on the frontlines are taking the stabs. Hundreds of thousands of doses are in trucks barreling toward the Lone Star state.

Dell Medical School is one of four facilities statewide to receive the first shipment of vaccines. Exactly 19 other facilities are scheduled to receive shipments on Tuesday. And by the end of the week, more than 220,000 of Pfizer’s doses should be in 110 hospitals across 34 Texas counties.

The end of the week is tomorrow or Saturday. A lot of Texans will be hitting the needle in the hope of getting back to normal.

But not so fast! Not according to Vin Gupta, MD. According to him, we don’t know if the vaccine does anything more than stop you from getting really sick:

“Just for your viewers out there, I know one of the officials who we just saw getting vaccinated is planning on traveling after the second dose. This is a source of confusion. This is one of the misperceptions out there. Just because you get vaccinated with that second dose does not mean you should be participating in things like traveling in the middle of an out of control pandemic or that you’re liberated from wearing masks.

“Everything still applies until all of us get the two dose regimen, and we don’t think that’s going to happen until June or July. And, again, this goes back to what we just talked about, Chuck. We don’t know if just getting the vaccination prevents serious illness, or does it also prevent you from getting infection entirely? Meaning, you can still get infected with the virus potentially and pass it on to others. So, really, really critical — don’t let your guard down just because you got vaccinated. You still might be able to get infected with the virus and pass it on to others, so please keep that in mind.”

So…what’s the point? Ok, it may keep you out of the hospital. What about resuming a pre-COVID life? That’s what we all really want. Illness is temporary. Loss of freedom is forever, so far.

We know the virus is contagious, but we also know that for the vast majority of people, it’s not deadly. It’s bad. Horrible. No good. But for most people who do not have an average 2.6 other comorbidities, the novel coronavirus is highly unlikely to kill you.

Exception: When your state or county decides that kinetic lead poisoning = COVID death. That really has to be stopped cold, right now, and those deaths removed from the COVID totals. We don’t know the actual COVID death toll because of counts such as that, which have been going on since April or thereabouts, eroding trust in the entire containment enterprise. They say we’re nearing 300,000 COVID deaths, but are we? Really? When gunshot deaths and the like keep getting slipped into the totals?

In fact, our alleged health experts have eroded trust for months from a plateau to a Grand Canyon of suspicion, starting with “two weeks to flatten the curve” stretching into this endless police state twilight and right through their endorsement of riots while they ordered our churches and our businesses closed, leaving millions of Americans facing eviction very soon. Restaurants aren’t major COVID spreaders? Shut ’em down anyway! Democrats think we all have Nancy Pelosi’s freezer full of gourmet ice cream at home, when the reality is most Americans live paycheck-to-paycheck. Any financial disruption is a personal disaster for them.

The experts’ recommendations, which should have been based on science and they claimed as much, have instead at least appeared to be quite political. Such as: Restaurants and other small businesses are closed, but Tom Cruise can shoot movies and scream at his powerless production staff if they stand an inch too close to one another. Why does Tom Cruise get to work and you don’t? He’s rich, you’re not, he has California Democrats in his pocket, and you don’t. So shut up, peasant.

Another exception: If you’re in a New York nursing home under Gov. Cuomo’s watch. That guy has it in for the old folks. Thousands died after he packed the nursing homes with COVID patients, and he stifled an investigation into it, wrote a book touting his super genius, accepted an award for blathering in his one-man-show press conferences, and sprained his arm patting himself on the back for his heinous deeds.

Count me in with Janice Dean the Accountability Machine.

Back to the virus and the vaccine. We know for the vast majority, on a sliding scale going down with age, the virus is very unlikely to be deadly or even require hospitalization. Kids don’t even seem to get it or spread it at all. But the teachers unions want the schools shut down, and where they rule, by God the schools are shut down. And you’re a racist if you question them about it. This, again, goes straight to Democrats and who owns them plus a media/Big Tech that’s explicitly on the Democrats’ side in all things. Not to science. A generation is being robbed of its childhood thanks to all this.

If you do get the virus, you’ll get sick and feel truly awful, but the virus isn’t likely to kill you. The survival rate is still above 99% and the younger you are, the less likely it is to be deadly. There have been exceptions, but the exceptions are not the rule.

So what, indeed, is the point of all the misery and uncertainty that the authorities have put us through? What’s the point of 2020 at all?

Florida and California have taken very different paths to dealing with COVID. Gov. Newsom belongs to the “draconian rules for thee but not for me” school, locking down everything except Democrat-friendly Hollywood movie productions while he runs off to dinner with lobbyists at a restaurant you can’t afford without selling a kidney. Florida’s Gov. Ron DeSantis has kept his state wide open for months. Florida has an older population; California’s is larger. Both are warm-weather states. Media pilloried DeSantis, because of course they did.

The states’ COVID experiences are very similar to one another, but because Florida is open it has about half the unemployment rate of California. Over the long haul Florida will have fewer evictions of the millions that are barreling toward a weary nation. It will have an economy capable of sustaining its medical community and its government. California is bleeding jobs by the thousands as Calexit speeds up. Newsom may face recall, which would be hilarious.

Yeah, I know, those Californians putting their own economic disaster in the rearview mirror are all coming to Texas. We need a wall or a welcome wagon.

As for the vaccine Dr. Gupta says we should happily take, but which won’t allow you to resume normal life, you’re going to get a lot of this from regular folks in response. This is what confusing messaging infused with rank politics leads to.

Unlike Joe Biden and Kamala Harris pre-election, I’m pro-vax here and always have been. But if our medical masters can’t articulate why we should go ahead and get stabbed, and how it stands to benefit us, more people will decide not to.

We certainly suffer from a pandemic of incoherent experts and garbage media reports. When they’re not downplaying the possibility of having a vaccine, they’re refusing to report on Middle East peace deals of a historic nature, covering for the monstrous national security liabilities named Hunter Biden and Eric Swalwell (which amounts to election tampering), and they’re just confusing the life out of a traumatized nation.