Ukraine hit targets inside Russia in the past few hours, complicating Russian efforts to stabilize their lines.

The weekend rout of Russian forces out of the Kharkiv Oblast (region) is nearly complete, and all signs indicate that Ukraine is moving quickly to continue the counteroffensive into the disputed Donetsk Oblast.

I’ll get back to Russia’s domestic politics shortly, but first let’s look at their deteriorating position on the ground in Ukraine — and inside their own borders, too.

The Ukraine Army barely paused for breath after clearing almost all of Kharkiv of Russian forces in a six-day counteroffensive that was basically wrapped up on Saturday. But that doesn’t mean the advance has stopped, as forces move into position to retake more and more of Donetsk.

This first video is from Russia’s Taganrog Air Base, which is home to a military air transport unit. It’s in Russia’s Rostov Oblast, about halfway between the cities of Rostov-on-Don and Russian-occupied Mariupol. That’s in the south on the Black Sea Coast.

It isn’t yet clear whether the strike on Taganrog Air Base was so loud that it was heard in all of those locations, or if there were strikes on various locations in Rostov.

UPDATE: As it turns out, the video above is actually from Ukraine’s strike last month on Saki Air Base in Crimea. So I’m less sure what was it in the Taganrog area, but it was heard for miles.

In Ukraine’s north, something is up in the Russian city of Belgorod.

Long lines of cars can be seen fleeing the city.

Belgorod is about as far from the Russia-Ukraine border as Kharkiv is, and this isn’t the first time Ukraine has struck there. But with Russian forces cleared out of Kharkiv Oblast, there might not be much in the way of Russian forces left to defend Belgorod.

With Kharkiv basically back in Kyiv’s possession, the battle turns east toward Donetsk without pause.

Due to the speed of Ukraine’s advance and the heavily forested terrain, Russian troops have left behind untold ammunition stores and abandoned countless vehicles.

When the roads are covered by the other guy’s HIMARS missiles, you stay off the roads and flee on foot.

It appears the greatest danger Ukraine faces is overextending and exposing themselves to local ambushes or even an encirclement. But unless and until the Russian Army gets its act back together, the risk seems low. Even the Air Force is suffering increased difficulties in recent days.

None of these developments are lost on Russia’s politicians or public figures.

PJ Media’s own Rick Moran reported on Saturday that “five Russian municipal deputies from St. Petersburg have been arrested after publishing a request to the Duma to have Vladimir Putin arrested and charged with treason.”

Under Russian law, those five deputies could face the death penalty — but they won’t be alone.

On Monday, 20 more municipal deputies from both Moscow and St. Petersburg signed a similar petition.

“We, the municipal deputies of Russia, believe that the actions of President V. V. Putin are detrimental to the future of Russia and its citizens.”

“We demand Vladimir Putin’s resignation as President of the Russian Federation!” reads the text of the petition, signed by about 20 deputies.

Torstrem emphasized that “the text of the petition is laconic” and does not “discredit anyone.

As I write this, there have been no reports of further arrests.

Further down the political food chain lie Russia’s milbloggers — but not that much further down.

Milbloggers serve an important role in how the Kremlin shapes narrative and public perceptions about all things military. As semi-independent, pro-Russia voices, their words carry weight with the Russian public.

One group of milbloggers I follow is Russian With Attitude, because they provide timely and generally accurate updates of events on the ground — served up with a bit of attitude.

Today they’re reduced to lashing out at Ukraine in general. 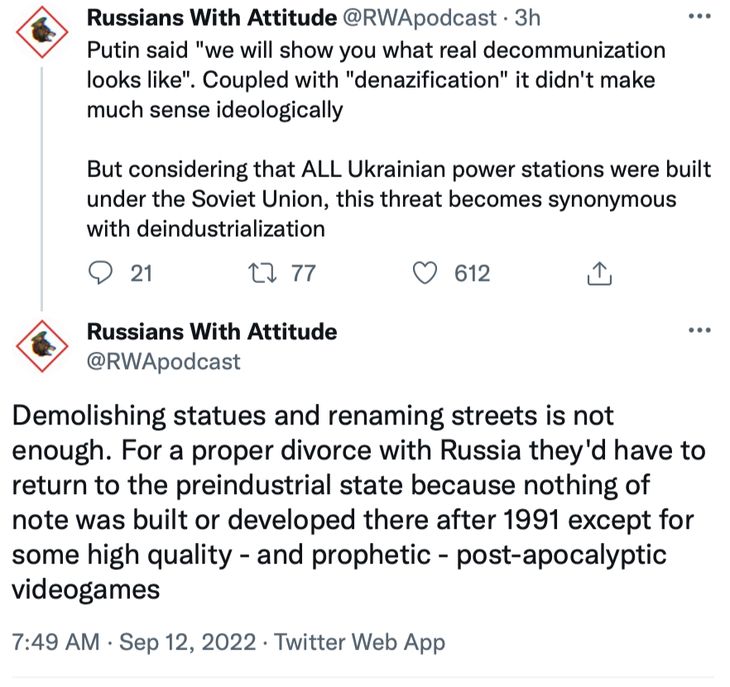 I used the RWA guys as an example, but the negative feelings are widespread in the milblogging community:

Russian milbloggers voiced concern that this Ukrainian counterattack seeks to cut ground lines of communication (GLOCs) to Russian rear areas in Kupyansk and Izyum, which would allow Ukrainian troops to isolate the Russian groupings in these areas and retake large swaths of territory. These milbloggers used largely panicked and despondent tones, acknowledged significant Ukrainian gains, and claimed that the Ukrainian counteroffensive in the south may be a distraction from the ongoing actions in Kharkiv Oblast, which they name as the main Ukrainian effort.

That was from four days ago, before Kyiv’s Kharkiv counteroffensive had realized even half the gains we see today. There’s no reason to believe their mood has brightened any since then.

Think of all those Russian soldiers, thrown into the meat grinder. The ending that Vladimir Putin deserves is his own military giving him the Full Ceaușescu Treatment.

But I have the feeling that however this stupid, needless war ends, it won’t end soon -certainly not soon enough.